The first three and a half years of my son’s life was utter turmoil. Then we adopted him and gave him a stable home and the next seven years were spent going from doctor to doctor; professional to professional. Along the way we gathered diagnosis – Attention Deficit Hyperactivity Disorder (ADHD); Tourette Syndrome (TS); Obsessive Compulsive Disorder (OCD); Intermittent Explosive Disorder; Sensory Integration Disorder (SID); Learning disabilities (LD) and held them tight as we researched them and received varied amounts of treatment for each.  However, even after all of these diagnoses, it still felt like we had missed something.  I tried to talk myself out of it – telling myself “enough is enough, now you are just trying to make things up” but I knew I wasn’t. I knew deep down that we still didn’t have the whole picture. 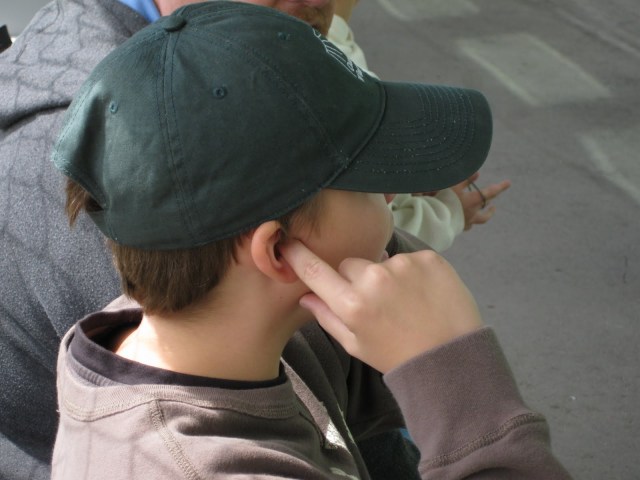 Over the years I danced around the possibility that was Autism.  I work in Early Intervention – I see kids with Autism all the time. When I described Corbin to people they automatically assumed he had Autism.  But I had a problem – I didn’t want to believe my child had Autism.  For years the diagnoses had piled up but we were repeatedly told we didn’t qualify for services such as Respite or Special Services at Home. We were told “If he had Autism then you would qualify”. It kind of left a bad taste in my mouth – every day I would see children with fewer needs than my own child receiving supports that we didn’t qualify for.  Then June 2009 came along and we met with the Developmental Pediatrician and were given a diagnosis of Autism.

“I don’t know whether to be relieved or be sad” I said to the doctor and settled on being a bit of both. “He’s still the same child” she said to comfort me.  But amazing how even though he was supposed to be the same child the world of Autism opened up and suddenly we were being offered activities and supports that had been off limits to us just the day before.  It made me feel bitter and indignant.  Children with Mental health issues need services just as much as kids with Autism.

So this is the head space I was in when we received the diagnosis. Unlike other diagnosis I kept this one close to my chest, not wanting to have to debate with people whether they felt he truly had it or not. Our local children’s mental health facility wanted to put us through another assessment before they would provide services. I decided we had enough jumping through hoops and we would just walk away from the little bit of help they would have given us.

When I talk about my son I am more likely to talk about his mental health challenges and his newest diagnosis of Intellectual Disability (formerly Developmental Disability) than I am his Autism. I have thought long and hard about why that is. If I am honest it is for two reasons. First, I feel bad about families who are struggling with their child’s mental health. I identify strongly with those families and I want them to know they are not alone. Second, for us, the Autism has been the least of our worries.  We understand this is not the case for other families, which is why I have hesitated to share this side of our story.  Don’t get me wrong, I am not ashamed of this diagnosis nor ashamed of my son.  I am extremely proud of who he is and how far he has come and I hope that he can embrace who he is – the sum of all these parts.

Tina Szymczak is a 40-something mom and wife with two spirited boys. She has worked in early intervention and as an advocate resource for families with a loved one with a disability. Now she also writes a blog about raising children with complex needs, trying not to lose your sense of self as you parent, and her struggles with mental health.

When You Don’t Know What to Say